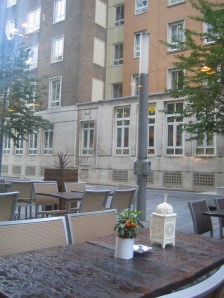 My first eating out Low FODMAP and I chose a Moroccan restaurant next to the hotel. Felt this might be a challenge – but I’m always up for that! My choices were a little restricted but I chose a plain meat dish, I asked the waitress what the fish dish of the day was, to which she replied there wasn’t one, so a steak was the choice to have, she informed me that this would be served with plain salad leaves and chips.

Now this is not what I would normally choose but needs must for the experiment so I said this is what I would have. It was actually really nice and the chips were thick cut and still had their skin on adding to the fibre content of the meal. The leaves were undressed and included a full grilled tomato. The dish also included a sauce, which was served in a separate dish so could be avoided, probably would contain at least onion and garlic, but perhaps I should have asked. Now for your sake ;-), I also decided to have a sweet

to see how easy this would be, I didn’t have much choice as the dishes included plenty of pastry and baklava, I chose a chocolate coated meringue. This was huge, a veritable titanic iceberg! What utensils do you think they provided to eat this with? A knife and fork, yes, really! A real effort had to be made to prevent it from being propelled across the restaurant. More went on the floor than in my mouth, probably for the best – very undignified, but lots of fun! I only managed about a third of it in fact, along with my really lovely mint tea. A nice meal, perhaps not what I would normally choose, and not Moroccan, but it was more than acceptable and would mean that I could eat out FODMAP free, should I wish too.