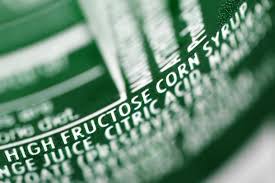 Fructose is a hexose, a single unit sugar which occurs naturally in fruit and is a component of the disaccharide table sugar sucrose; it is also the building block of the long chain carbohydrate, fructans. This sugar is absorbed across the intestinal mucosa by facilitated diffusion (via GLUT 5 or GLUT 2, transporters) – a slow method of absorption, when fructose is consumed in equal amounts to glucose, by rapid active absorption. This sugar has been seen by many as a ‘healthy’ alternative to table sugar, however, recently high fructose corn syrup (HFCS) and fructose in beverages has been implicated in the rise in obesity. But fructose consumption (in excess of glucose) is often malabsorbed when consumed in large amounts, so what is going on here? It seems incongruous that a commonly malabsorbed sugar such as fructose should be implicated in increasing rates of obesity.

In recent years, availability of fructose in our diets has increased. HFCS or fructose-glucose syrup, in processed sweetened foods and beverages, and use of crystalline fructose sugar and Agave syrup seen as ‘healthier’ alternatives to table sugar, it is perhaps not surprising that fructose consumption in processed foods and drinks was reported recently by The Guardian as a current area for concern (2). A Guardian article stated that HFCS was to be re-branded to improve its image (1). A new worry is the amount of sugar contained in smoothies, promoted by beverage manufacturers as healthy drinks containing natural sugar and an easier way of increasing your fruit intake, to achieve your recommended five a day (2). Whilst the UK population average intake of HFCS sugar remains far lower than other countries, such as the USA (3),  individuals with weight management requirements may exceed these levels of intake easily, with HFCS being a component of sweet foods and beverages. High intakes are associated with obesity, type 2 diabetes and metabolic syndrome, however, Fulgoni, (4) consultant to the American food and beverage industry suggested that HFCS is no different in its metabolic obesogenic capacity than sucrose, as the structure of sucrose contains one fructose unit per molecule. Obesity is a multifactorial problem and focussing on one aspect in the diet may be misleading, anyone consuming large amounts of HFCS may also have a diet high in fats and other refined carbohydrates. These carbohydrates, when digested, may facilitate fructose absorption reducing the malabsorption effects that often result from excessive consumption.

Unpleasant gastrointestinal symptoms such as osmotic diarrhoea can result from excessive fructose intakes, as a consequence of exceeding the guts absorptive capacity. This malabsorption of fructose in excessive amounts perhaps suggests that the role fructose plays in obesity should be further studied, alongside other refined carbohydrates consumed in the diet, as fructose is not ingested in isolation. Intake of carbohydrates such as glucose and long chain refined carbohydrates may facilitate fructose absorption. Research suggests that intestinal adaptation to diets of pure fructose can occur in study animals (5, 8) to facilitate absorption, but it is not known to what extent this adjustment compensates for malabsorption in humans, who often have very varied and complex diets. Population studies have suggested a link between HFCS and fructose ingestion from beverages with obesity (3). But more needs to be known about the efficiency of absorption, degree of brush border adaptation (if this in fact does occur in humans) and a breakdown of carbohydrates consumed. In these groups it needs to be established whether correlation of fructose intake represents causation, or whether intake of HFCS represents just one of many aspects of the diet which ultimately leads to obesity.

Excessive fructose intakes leading to diarrhoea perhaps should not be considered as a functional disorder per say, as most individuals will malabsorb fructose if consumed in large amounts. Intakes of 50g fructose in 250ml liquid are malabsorbed by 60-70% of individuals, when levels are reduced to 25g, 40% of people malabsorb fructose (7) Advice to reduce levels of intake in these cases would seem prudent. Individuals where visceral hypersensitivity and functional disorders (Irritable Bowel Syndrome, IBS) are an issue, fructose malabsorption should be considered as a possibility.

Use of fructose breath testing for identification of fructose malabsorption has increased, to enable treatment with a low fructose diet to be utilised for those patients that need it. Gibson & Barrett recommend a diet low in FODMAPs must be consumed 24 hours prior to the breath test, to establish an accurate baseline level (5). However fructose breath testing remains a controversial test, due to variations in methodology, leading to confusion about accuracy (6) amongst health professionals. Where testing is not available, dietary fructose exclusions are effective to identify malabsorption and facilitate dietary treatment provision. For patients with Irritable Bowel Syndrome the most effective way of treatment is to exclude all Low FODMAP foods (assuming lactose malabsorption has not been excluded) and re-introduce to tolerance after 8 weeks.

For those with fructose malabsorption exclusive of IBS, reduction of the sources of fructose in excess of glucose should be advised (10.) In all patients, modifying fructose intake, rather than increasing glucose consumption to facilitate absorption, particularly where the patient is overweight is recommended (10.) It would be better for patients who find manipulating their diet to resolve symptoms a challenging goal to achieve, to be able to take an enzyme to facilitate conversion of fructose to glucose and facilitate absorption. Xylose Isomerase is commercially available and marketed as a solution to fructose malabsorption. It has been recognised by the FDA as safe and been found to be effective in doses of 3 capsules per 25g fructose load (9.) However the commercially available grades advise that these products should not be taken by individuals with inherited fructose malabsorption, so why is this advice given – and how would you know if someone has the condition? Also research into Xylose Isomerase has been funded by the company that market these digestive enzymes, who have a clear interest in proving this product is effective, so the advice is somewhat biased from this respect. However reducing fructose intake might be a more suitable option for individuals who are obese, as using these enzymes may facilitate an increase in energy intake. Dietetic treatment should involve assisting the individual to find a solution when individuals are having problems in following advice, such as suitable written information in an easily understandable form and helping with barriers to goal setting.

This condition occurs as a result of an in-borne error of fructose metabolism, and therefore acts by a different mechanism to fructose malabsorption. The deficiency is of Fructose 1, 6 biphosphate aldolase (Aldose B.) Ingestion of fructose results in post prandial hypoglycaemia and abdominal pain, diarrhoea and vomiting, the ingestion of fructose, sucrose, and sorbitol is problematic for these individuals (12). If consumption is continued hepatic injury, renal injury, coma and death can result (12). This condition is often identified in childhood as consumption of fructose can produce severe symptoms; it is recognised when these carbohydrates are introduced into the child’s diet. However some children have survived to adulthood without the condition being recognised, by self excluding sugar from their diet. Patients have to inherit the deficiency from both parents, who carry the gene but do not exhibit symptoms. Its prevalence is one person in every 20,000 to 30,000 so it is a rare condition, but should be considered if post prandial hypoglycaemia and other gastrointestinal symptoms are reported (11). Born (7) suggests that blood glucose levels should be checked in individuals referred for fructose breath tests, to identify these individuals. It would be prudent to consider this condition with symptomatic individuals who report that ‘sugar’ is a problem and have taken steps to exclude it from their diet.

Clearly fructose malabsorption, digestion and metabolism is a very complex situation and more studies are required to improve knowledge of fructose’s’ dietary effects. Focussing on fructose provides one example of how complex human nutrition and metabolism is, and how improved knowledge is vital to help patients to manage their symptoms. High fructose corn syrup/fructose will be digested to some degree depending on the proportion of glucose it contains, and the individuals levels of GLUT transporters, but despite this many individuals with functional bowel symptoms struggle to digest even low doses. This brief look at fructose digestion also suggests that obesity is a multifactorial public health problem and blaming one nutrient or food may do little to resolve the problem in the general population. In fact publicly concentrating on one minutiae of the causes of obesity beclouds, possibly resulting in confusion for the general population which could cause apathy around lifestyle change. As always, research into digestion should involve a complete food intake analysis facilitated by a research dietitian, including a review of confounding variables. A review of total energy consumption and it’s implications on fructose absorption in the case of HFCS’s relationship to obesity would be advisable, but this will only add a little information to the whole question of the causes of obesity in our society.

2) Clark, A. (15th September 2010) Manufacturers petition regulator to change name to ‘corn sugar’ as consumer backlash grows against the food and drink sweetener in the US The Guardian available from http://www.theguardian.com/business/2010/sep/15/high-fructose-corn-syrup-rename

4) High-fructose corn syrup: everything you wanted to know, but were