I have always wanted to try fried green tomatoes ever since I watched the film ‘Fried Green Tomatoes at the Whistle-stop Cafe‘. It is one of my favourite films starring Kathy Bates and Jessica Tandy, it has a complex plot but is worth watching. Well, on Saturday I bought some green tomatoes and decided I would finally give it a go! I also bought some pork steaks so here is the recipe: 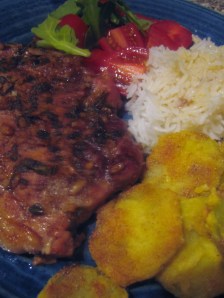 Rub this mixture into the pork steaks.

I cooked this immediately but it will probably benefit from marinading for a couple of hours.

Cook in the oven at gas mark 5 for 1.5 hours (the longer the better really to ensure the pork is really tender.)

Slice the tomatoes and dry them between pieces of kitchen paper.

Crack the eggs into a dish and beat with a fork

Put the maize meal onto another flat plate and season with salt & pepper.

Dip the sliced tomato into the gluten-free flour first, then egg and finally into the maize meal. Coat thoroughly with each dip.

Fry the tomatoes in a little oil till golden.

I served both these dishes with a little boiled rice and tomato with rocket.

According to the reviews I read on the internet before I tried this dish people have lots of memories of eating fried green tomatoes cooked by their mothers and grandmothers. I am sure I cannot give this dish the taste that someone who has cooked this for family for years. But I have to mention that it is a dish that doesn’t seem to be worse for using gluten-free flour – in fact I think by using a rice based gluten-free flour blend, the crispness may be better than the original!